Every week there is a new FUT 14 Legends Spotlight. This week is the time of Jens Lehmann.

The third player to be appointed to Legend of the Week was Jens Lehmann.

Jens Lehmann is one of the best German goalkeepers to ever play the game.

Lehman began his career in 1988, spending ten seasons with FC Schalke 04. The club was promoted after his third season, and Lehman helped the side win the UEFA Cup in 1997.He even managed to score two goals as a goalie, once from the penalty spot in 1995, and another from open play in 1997.

Lehman left Gelsenkirchen and had a short stint in Milan before returning to Germany and signing with Borussia Dortmund in 1999. He spent five years there, winning a Bundesliga title in 2002.

Jens Lehmann joined Arsenal in 2003 and played in all 38 matches for the London-side en-route to their undefeated Premier League title. A year later, he would add an FA Cup to his trophy cabinet.

After the five-season stint with Arsenal, Lehmann returned to Germany for a second time, this time with VfB Stuttgart. Lehman played in 65 matches before retiring briefly in 2010. He would make brief return to the sport in 2011, signing with Arsenal once again, but would only play in one match as a substitute. Lehman would retire for good in 2011.

With Germany’s strong pedigree of fantastic keepers, Lehmann’s presence on the international stage never quite matched what he contributed domestically. But even so, he was a part of Germany’s 2002 FIFA World cup runner-up squad and he was their first-choice keeper in 2006, where Germany hosted the FIFA World Cup and finished 3rd overall. 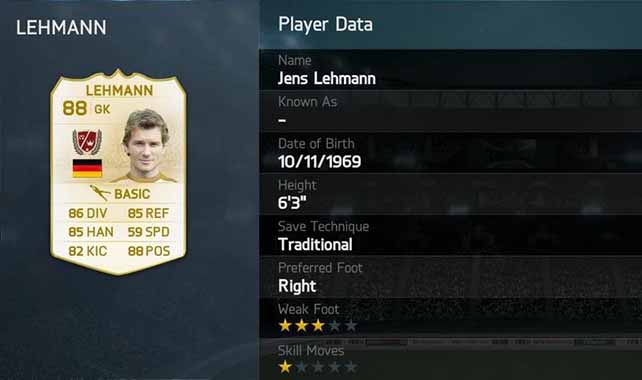