The top 128 competitors in FIFA 18 Ultimate Team gathered in Manchester this weekend to compete for $200,000 worth of prize money and one of the sixteen available spots in the FIFA 18 Global Series Playoffs in June. The tournament started on Friday with players divided between the PlayStation 4 and Xbox One divisions, and only 64 players would progress to the knockout stage of the tournament on Sunday. Each round of the group stage (a total of seven) had players face off against opponents with an identical record in the tournament thus far, and four wins earned automatic qualification to the bracket stage. Players with four losses were automatically eliminated from the tournament. There has been a ton of intense FIFA 18 action throughout the first two days of the competition so far. Let’s find out what exactly happened.

THE REMATCH
The excitement started not long after the tournament did, as reigning Barcelona champion Donovan “F2Tekkz” Hunt quickly proved that he wasn’t a one-hit wonder. Fresh off signing with F2Freestylers, F2Tekkz scored his first goal in the eighth minute of his first game against Melbourne City Marcus, en route to an impressive 8-2 win that kicked off his tournament in style. Despite a strong Round 2 in which he defeated Rayziaah 6-2, F2Tekkz was finally bested in an exciting rematch with none other than Kurt “kurt0411” Fenech. F2Tekkz won the first game via a tense 1-0 win, but that was followed by a dominant performance by kurt0411 in the second to earn a 6-3 win. Hopefully this won’t be the last we’ve seen of this matchup this weekend.
Both F2Tekkz and kurt0411 won their next two rounds and progressed to the bracket stage, but it was the former who produced one of the most dramatic moments of the day. F2Tekkz was on the brink of another loss in his Round 4 match-up with RemiMartinn, but he showed his quality yet again by snatching a late win with a goal in the 120th minute. Kurt0411 went undefeated until the very end, picking up his only loss of the day in Round 5, when he fell 7-3 to Falcon Msdosary.

SHOOTOUTS ABOUND
Some of the most intense drama of the day came via a number of penalty shootouts. El Polako and Vitality Brian went to penalties in Round 3 after a wild 8-8 draw at the end of regulation and extra time, ending with a 3-2 shootout win for El Polako. A number of big-name players also saw penalties early, as both UNILAD Gorilla and FaZe Tass lost their Round 1 matches after a shootout.

INVINCIBLE . . . SO FAR
Thanks to the exciting Swiss format of the FUT Champions Cup group stage, only four players were able to go undefeated on day one. ARES Janoz and Falcon Msdosary earned 5-0 records in the Xbox group, while MCFC deto and TM NICOLAS99FC went perfect on PS4. Since it only takes four wins to move on, these players are among the group that will qualify for the bracket stage after the final two group rounds wrap up on Saturday.

GIANTS FALL
Some notable names were unfortunate enough to be on the opposite end as well, as the likes of UNILAD Shellzz, Vitality Brian, FUTWIZ Richie, and Marlut picked up four losses on the day and were automatically eliminated. Many more players stand on the brink of elimination after losing three of their five matches on day one, meaning that there will be plenty of nerves and excitement as each competitor fights to stay in the tournament.

HASHTAG DERBY
The day finished with a fun, yet highly competitive matchup between Hashtag United teammates Harry and Ryan. The second game of the match went down to the wire, but Harry earned both bragging rights and a spot in the bracket stage with a 4-3 win. Ryan is still in it with a 3-2 record, and he’ll be a favourite to join his teammate in the next round as the group stage comes to a close on Saturday. 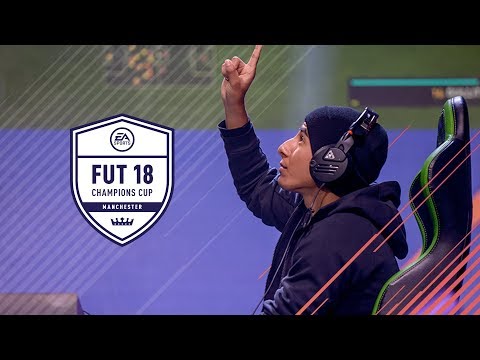 UNDEFEATED, BUT NOT FOR LONG
Four players were still undefeated at the beginning of the day: ARES Janoz and Falcon Msdosary went 5-0 in the Xbox bracket, while MCFC deto and TM NICOLAS99FC were 5-0 on PS4. The Swiss format dictated that these four players would be paired up in the sixth round, so the group of four was cut in half quickly. TM NICOLAS99FC and ARES Janoz won their respective matches, and both stayed undefeated by winning their round seven matches.

SOUTH AMERICA’S TIME TO SHINE
Achieving a 7-0 unbeaten run through the group stage is a significant achievement on its own, but even more remarkable is that both players are based in South America. In a sport heavily dominated by Europeans right now, successful players from any other continent tend to be outliers. NICOLAS99FC, the PS4 finalist at the FUT Champions Cup Barcelona, is from Argentina; Janoz hails from Colombia. Both represented their countries and continent well in the group stage, and neither stopped there. They continued to dominate into the knockout rounds; NICOLAS99FC easily knocked off Joksan in the round of 32 and came from behind to get the one against powerhouse RBL Cihan. Janoz narrowly defeated RebordRedinho in his round of 32 matchup before finally breaking down against Megabit, who ended the Colombian’s unbeaten run with a 3-2 win.

THE FAIRYTALE IS OVER
Reigning Barcelona champion F2Tekkz looked like he might repeat his fairytale story again on Friday as he dominated most of his competition; he even played well in his lone loss to kurt0411. He finished the group stage strong with wins over FUTWIZ Dubzje and Megabit that secured him a 6-1 record going into the bracket. Though he didn’t have much trouble with his round of 32 matchup, in which he beat MCR JParky 6-1, every fairytale must come to an end.
The bracket placed F2Tekkz in the round of 16 with newcomer RemiMartinn, the Los Angeles-based competitor who turned heads in the previous round when he decisively defeated FaZe Tass. The match was entertaining and mostly even, but RemiMartinn pulled ahead in the end to produce a 6-4 upset and send F2Tekkz packing before the final day of the tournament. He will face Falcon Msdosary in the Xbox quarterfinals on Sunday.

THE BRACKET SHOWS NO MERCY
The group stage eliminated more high-profile players in rounds six and seven, including NYC_Chris, Hashtag Boras, and TimoX. But as tough as it was to make it out of the groups, the knockout stage made it even more difficult for competitors to progress because they only had one chance to go through — or be eliminated. Even the most high-profile of players that triumphantly marched into the bracket faced its swift reality. FaZe Tass’ loss to RemiMartinn sent shockwaves through the room, warning fellow professionals that no player was to be overlooked. The shocking round of 32 results continued as M Herozia knocked out Hashtag Ryan, FUTWIZ Honey Badger buried Hashtag Agge, and reigning Virtual Bundesliga champion FCB TheStrxnger fell to FIFAustun. The shocking eliminations of F2Tekkz and Janoz, were not the only round of 16 upsets and heartbreaks. Unilad Gorilla lost an incredibly tight match to GoalMachine21 and kurt0411 was decisively defeated by M Herozia.

NEW NAMES, NEW STORIES
But as more and more recognizable names get eliminated, new stories are being written by newcomers and lesser-known competitors as the tournament continues. RemiMartinn defeated two of the best FIFA players in the world on his way to a quarterfinals berth, while GoalMachine21’s win over Gorilla showed why it’s important to never stop fighting and pushing for goals in this tournament. The NICOLAS99FC redemption tour continues to blaze forward on schedule, and he heads into the quarterfinals as the only undefeated player left in the competition. Some traditional narratives may have crumbled on Saturday, but don’t be surprised if even better stories rise from the rubble as FUT Champions Cup comes to a close on Sunday.