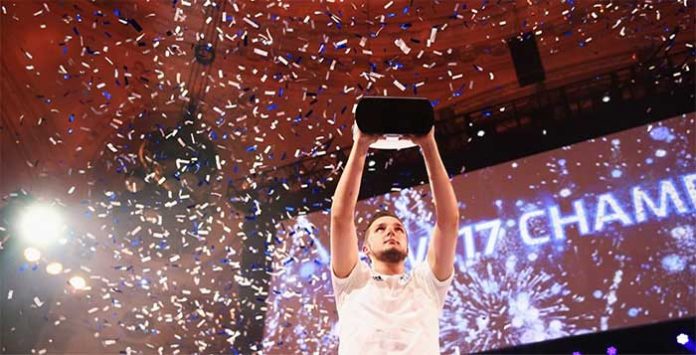 The main stage in London’s Central Hall Westminster was an elegant and polished venue for the final matches of the FIFA Interactive World Cup 2017 Grand Final. Over seven million players during an almost-year-long season attempted the road to London, but ultimately only one player was left holding the world trophy, and that player was local boy GORILLA. Armed with the reputation as the best attacker in the history of FIFA, local boy Spencer ‘GORILLA’ Ealing dominated the day to win England it’s first ever taste of gold-medal glory at the FIFA Interactive World Cup. The Englishman scored 46 goals over three days to win the world title.

A red card at 34 minutes saw DETO down to ten men and awarded TIMOX a penalty and the chance to kill the first leg deficit. The 20-year old stepped up and slotted it away to take a 1-0 lead. The lead held and forced the PS4 Final into a Golden Goal match. There was elation, drama, then despair as TIMOX scored, celebrated and only then released the goal was ruled off-side. DETO, a third-place finisher at FIWC 2012, had the experience and capacity to level-up and scored a golden goal that would go on to be worth USD 40,000.

The six-goal deficit surgically crafted by England’s GORILLA in the first leg proved just too much to come back from for German’s CODYDERFINISHER. Asked at the final whistle if he was happy, GORILLA, always the perfectionist, berated himself for his second leg performance. Celebrations and screams were left to GORILLA’s coach Sean Allen who seemed to be exercising some of his own FIWC demons. Allen blew a commanding lead late into the second leg of last year’s final and finished runner-up at FIWC 2016.

It was England against Germany in London to decide the world title and with it the winner of USD 200,000. The packed crowd in Westminster couldn’t have asked for more. A coin toss conducted by Chelsea star signing Alvaro Morata forced the first leg onto the PlayStation. The Juventus, Real Madrid and now Chelsea star was quick to admit that despite his talent he would have no chance against the level of these finalists on a console.

DETO took command at first, accumulating a 3-1 lead, but GORILLA forced his way back on his weaker console to ensure a 3-3 draw at the end of the PlayStation leg. On Xbox, GORILLA did what he has done throughout the knockouts, scoring goal after relentless goal to demolish his opponent.

The Winner of the FIFA Interactive World Cup 2017

Ruud Gullit could only laugh while watching from his seat in the audience as GORILLA decided to substitute the virtual Gullit for a fresher man in the Xbox final. GORILLA redeemed himself in the eyes of the AC Milan and Dutch legend when he scored a critical goal in the gold medal match using the Dutchman.

“I’ve had the pleasure of commenting and watching GORILLA play copious times over the last three years,” Spencer Owen told . “When he’s on song there is no one that can beat him, I’ve seen it so many times. His decision making, his first touch passes, his finishing are all great, but I think mainly it’s his mentality, he’s just got the ability to turn it on.”