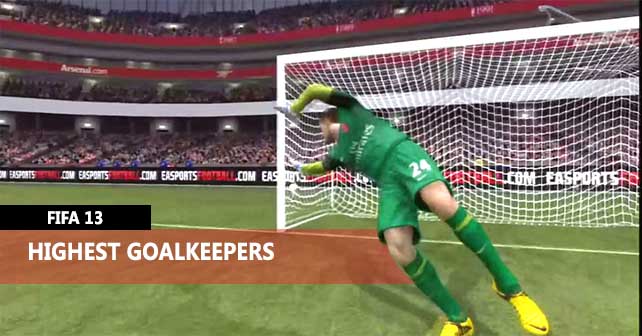 Who are the best highest goalkeepers of FIFA 13 Ultimate Team ?

Did you know that the height of a goalkeeper is one of the most important things that he should have in order to make great saves? It’s true. The other players have more than 30 attributes to help to distinguished from each others but the goalkeepers only have the main six (diving, handling, kicking, reflexes, speed and position). In our opinion, diving and reflexes are the two most important but if you really play a lot of FIFA 13, you should know that short goalkeepers is something to avoid. To some gamers, the height is the most important thing a goalkeeper should have. The highest the goalkeeper, less goals he will conceded.

This man lives in the sky. He is the highest player of FIFA 13. 208 cm is amazing even to some NBA players.

He plays on RC Genk, Belgium Pro League, and he is a silver player. His stats are not great but if you really want the tallest player, he is your man.

Pantilimon is the Romanian goalkeeper that plays in Manchester City. He is 5 cm short than Van Hout but his stats are much better. Since signing for Manchester City, he has become the tallest player in the Premier League.

He usually plays for his country in the national team and he is a good option to silver squads.

Ndoye signed for Esfahan side Zob Ahan F.C. in 2005. After Iranian football league imposed foreign goalkeepers ban he moved to Ukraine. He was linked with Metalist Kharkiv first and had a short trial there, but then he signed two-year contract with Volyn Lutsk.

Now, he plays in the SpVgg Greuther Fürth, from Bundesliga, and he is the third highest goalkeeper from FUT 13 with 202 cm. He is slow but with great reflexes.