FIFA 17 Journey’s Creative Director Mat Prior explained in a short interview how the new game mode was created and how it will looks like.

Interview to the FIFA 17 Journey’s Developer

Powered by Frostbite™, EA Sports FIFA 17’s The Journey* for the Xbox One, PlayStation 4 and PC lets you make your mark on and off the pitch as Alex Hunter, a rising star in the Premier League. Developed over the last 18 months with the help of real players including Harry Kane and Anthony Martial, this new mode is the first story experience in the FIFA franchise. The Creative Director Mat Prior showed the making of The Journey.

Why develop a story mode for FIFA 17?
MP – It’s a side of football we have never been able to showcase before and is something we have wanted to do for several years – give the player the experience of living a professional football career on and off the pitch. We have done an amazing job of recreating football through gameplay but up until now we have never ‘peeked behind the curtain’ and brought to life what happens off the pitch. That side of the game has become more known about in recent years through social media and the countless number of websites devoted to the sport. Fans can digest football 24/7 and have a window into footballer’s lives outside of matches that just wasn’t available before. I think it’s a side of football people are very interested in now and it’s a great opportunity to really innovate in FIFA 17.
It’s also a mode that will allow players to learn about the sport but just as importantly get familiar with the game – you can learn the fundamentals of FIFA and some of the more advanced functionality through playing. Any player that completes The Journey should not only have a great time but come out the other side with the ability to play the game at an even better level.

How long has it taken to develop The Journey?
MP – We have been thinking about this for a long time and been plotting ideas for more than two years. We mapped out the story and all the features, then a large section of the team came together back over a year ago. Most of the EA Sports FIFA team have worked on an annual cycle. So for this, it was a pretty long production but at the same time, a very rewarding process.

FIFA 17 is the first in the series to use the Frostbite engine, how did it help shape developing The Journey?
MP – Without Frostbite, a story this immersive doesn’t happen. It really gave us the means to tell the story. We built our engine around delivering authentic true to life action on and off the pitch, but with the move over to Frostbite gave us the opportunity and the tools required to create scenes and environments necessary for this kind of mode. The Frostbite engine has given us a lot of incredible games many of which featured story modes and it was the perfect vehicle for us to bring a story into FIFA.

What were some of the exciting parts for you and the team as you were working on the mode?
MP – I have been on FIFA for many years as have many of my colleagues, therefore, I think the most exciting part for us was delivering something very new and unique to the world of FIFA. We are all used to seeing the amazing players and stadiums we create every year but building new football worlds that have never featured in FIFA before like apartments, airplanes, and hotel rooms was an interesting change. Developing and casting the characters was also something new to us as we usually just recreate existing athletes. To create fictional characters both visually and in terms of personality and back story was an exciting change of pace.

The Journey revolves around the life of Alex Hunter, can you tell us a bit more about him?
MP – Alex is a 17-year-old kid from humble roots in Clapham, a suburb of London. He has football in the blood and is the grandson of an English legend Jim Hunter and the son of a footballer whose career ended early. 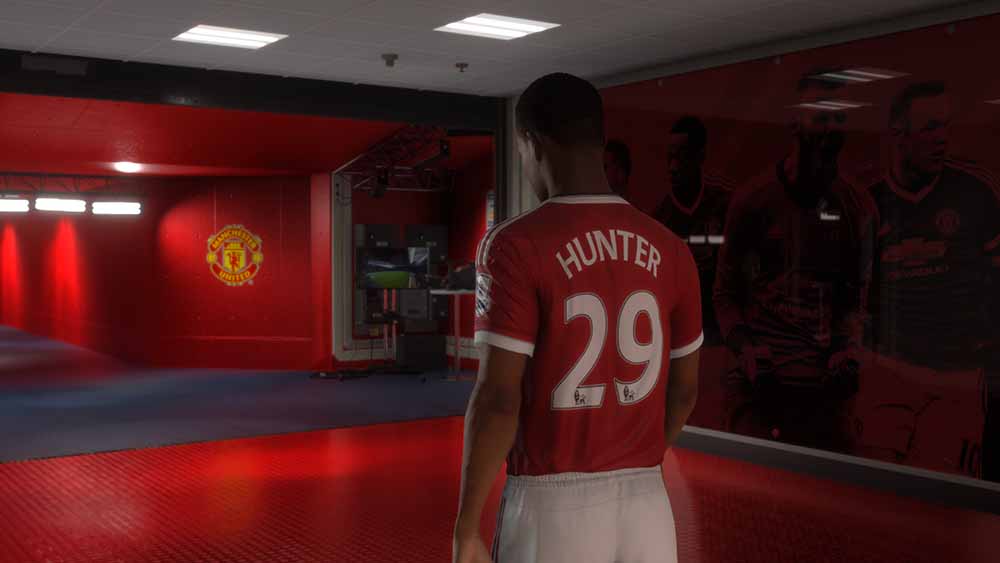 What makes The Journey authentic to the sport of football?
MP – Authenticity is, and always will be very important to FIFA. With a story-based mode, it also meant bringing that same level authenticity in a very different way. We did a lot of research, looked at real player stories and experiences to craft The Journey. We spoke to ex-players and worked with people who live and breathe football including Tom Watt who ghost-wrote David Beckham’s autobiography.
In the later stages of development we also ran The Journey past a number of current young professional footballers, like Reece Oxford and Marcus Rashford. That part was particularly rewarding – all the feedback from those guys was about it feeling real and in many instances it mirrored many of their own experiences. Things like family being incredibly important in supporting them through the ups and downs of professional sport was something that they could all relate to. It was good to have that frontline feedback and confirmation that what we had created was authentic.

When someone starts playing, what do you hope sticks with them as they progress through the mode?
MP – Hopefully, they get invested in the characters and the story and really care about what happens to them. We hope it also teaches players something about a side of football not seen every day. For the new and casual fan, we hope it gets them into both our game and the sport.

Are there any surprises or treats in The Journey you can tease us with?
MP – That would be telling! You will have to play the mode and find out but a lot of what happens is in the hands of the player – your decisions change how Alex’s career develops, meaning different players will have different experiences.