Matt Prior, Lead Producer of 2014 FIFA World Cup Brazil, talked about the new video game to IGN in a interesting interview.

Matt Prior, Lead Producer of 2014 FIFA World Cup Brazil, was interviewed by IGN to reveal more details about the new video game that will be launched this April.We bring you the best parts of this interview.

Only on Current-Gen Consoles
“When we ship, we will be the best football game on 360 and PS3 (…) It’s an evolution of the game engine really. It gets evolved from FIFA to FIFA, and then we come in and get involved”

World Cup is a Good Business Opportunity
“The World Cup is a unique product in that it splits the market 50-50 in terms of who buy. So about 50% of users are brand-new to FIFA – they have never played it before. And obviously that’s the mass appeal of the World Cup.”

Who Should buy this game ?
“Primarily potentially that’s one of the reasons. They’re just not good enough at the game, and they want a positive experience. And even at the lowest difficult level – amateur – they’re still not having much fun. So we’ve made big strides to focus on these players. So we’ve actually introduced a brand new difficulty level specifically for those people called ‘Beginner’. Which is very much an entry level difficult, which allows you to have that positive experience. It’s not a skill level that we anticipate people stick with for a long, long time. It’s very much considered an entry level position. (…) If you’ve never played FIFA before, this is definitely the product to get on board.” 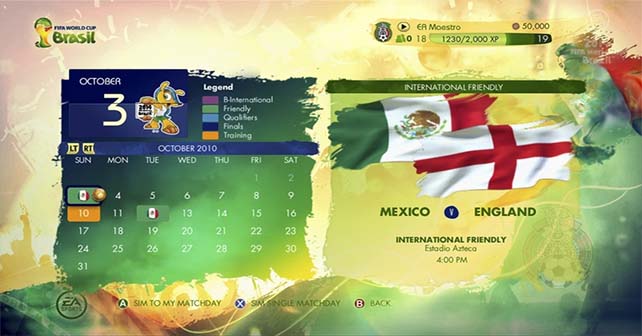 If you want to know more about this game, just click HERE.

2 thoughts on “Interview with Matt Prior, Lead Producer of 2014 FIFA World Cup Brazil”