Every week there is a new FUT 14 Legends Spotlight. This week is the time of Christian Vieri.

The first player to be nominee to Legend of the Week was Christian Vieri. He was named in the FIFA 100, a list of the 125 greatest living footballers. For a number of years he was regarded as one of the finest strikers in Europe, leading to him becoming the world’s most expensive footballer in 1999 when Inter Milan paid Lazio £32 million for his services. Most notable clubs were his spells at Juventus, Atlético Madrid, Lazio and Inter. Christian Vieri has often been described as an old fashioned centre forward, due to his physical presence and outstanding aerial ability, he is the all time top scorer of headed goals in Italian league history. 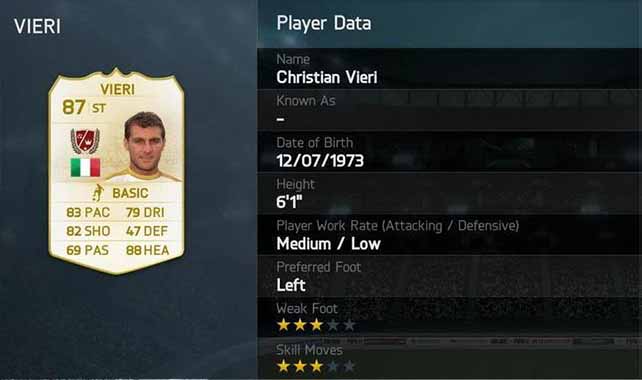 The Spotlight changes to a new Legend each week on Friday at 6pm UK time (9am Pacific). Check our website to know who are the FUT 14 Legends Spotlight.