EA has revealed who are the best goal scorers from Ligue 1 in FIFA 14.

It doesn’t need to mean that they are the best ones. On Ultimate Team, for example, there are much more cards of Torres than Aguero. And more cards means having more chances to score. Let’s see who are the ten Ligue 1 players with more goals scored.

Position: 1
Name: ZLATAN IBRAHIMOVIC
Position: ST
Nationality: Sweden
Club: Paris SG
Summary: No surprise here: the highest scoring Ligue 1 player is Ibra. The popular Swede is one of the best players in the world and possesses some of the strongest skills you can find in FIFA 14. He stands out thanks to 93s in Shot Power and Strength, but he also scares defenses with 91s in Penalties and Finishing, 89 Volleys, 88 Dribblings, 86s in Long Shots Short Passing and Agility, and 84s in Aggression and Vision. Ibra is the kind of player a manager dreams about coaching, one who can give the opposing side nightmares!

Position: 2
Name: EDINSON CAVANI
Position: ST
Nationality: Uruguay
Club: Paris SG
Summary: Physical attributes have been the dominating factor on this list and Edinson Cavani is no different. He commands the pitch thanks to a number of fantastic traits including 94 Stamina, 92 Jumping and 90s in Finishing and Positioning. But he also can score goals thanks to his skills including 86s in Sprint Speed and Aggression, 85s in Heading Accuracy and Shot Power and 84 Ball Control. When you need a reliable goal-scorer, Cavani will not disappoint.

Position: 3
Name: RADAMEL FALCÃO
Position: ST
Nationality: Colombia
Club: AS Monaco
Summary: There is no question why the South American Cover Athlete is so high on this list. The AS Monaco striker is one of the best with his head thanks to his 95 Heading Accuracy, 94 Positioning and 93 Jumping. He’s also a beast in regular play with 94 Finishing, 93 Volleys, 85 Ball Control, 85 Agility and 80 Acceleration. And if you need someone from the penalty spot, his 87 Penalties makes him a sure thing.

Position: 4
Name: EZEQUIEL LAVEZZI
Position: LW
Nationality: Argentina
Club: Paris SG
Summary: The Left Winger Lavezzi is another physical player that any club would love to have controlling one side of the pitch. 94 Agility, 92 Balance, 89 Acceleration and 87 Sprint Speed are ratings that excite managers. His talents don’t end there – 88 Ball control, 87 Dribbling, 85 Reactions and 83 Shot Power make it difficult to take the ball away from him and part of the reason why he’s scoring so many goals in FIFA 14.

Position: 5
Name: LUCAS
Position: RM
Nationality: Brazil
Club: Paris SG
Summary: Since joining the Paris club in January of 2013, Lucas has been slowly making his mark in Europe. He’s dangerous in FIFA 14 in large part to his fantastic physical attributes. The 21 year-old is highlighted by 94s in Acceleration and Agility, 91 Sprint Speed and 89 Dribbling. His 4* Skill Moves are complimented by his 85 Long Shots, 84s in Ball Control and Balance, and 81s in Short Passing, Shot Power, Reactions and Positioning.

Position: 6
Name: JÉRÉMY MENEZ
Position: ST
Nationality: France
Club: Paris SG
Summary: The 26 year-old player can not only score but also set-up team mates. He possesses an 85 Ball Control in addition to an incredible 88 Dribbling and 81 Short Passing. Ménez is a physical player with 88 Agility, 87 Acceleration and 86 Sprint Speed.

Position: 8
Name: ALEXANDRE LACAZETTE
Position: ST
Nationality: France
Club: Olympique Lyonnais
Summary: At only 22 years of age, Lyon’s Alexandre Lacazette has plenty of potential. In FIFA 14, his physical strengths include 86s in Acceleration and Sprint Speed and 81s in Agility and Balance. If Lacazette can outrun the defence, a goal should quickly follow.

Position: 10
Name: MATHIEU VALBUENA
Position: CAM
Nationality: France
Club: Olympique de Marseille
Summary: The long-serving Valbuena has been scoring goals for his club on Ligue 1 since 2006. Part of the reason he’s such a great goal-scorer is his abundant skills with the ball, including 86 Ball Control and 82 Curve. He’s also fast, thanks to his 92 Acceleration and 91 Agility, which allows him to outpace the defence. 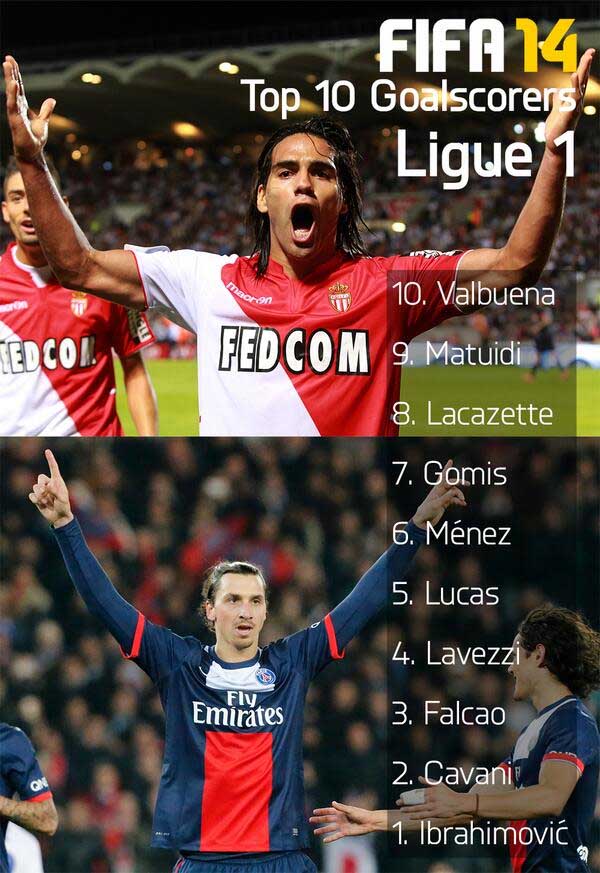