There are some new details about the new EA Sports title 2014 FIFA World Cup Brazil.

There are some new details about 2014 FIFA World Cup Brazil:

There will be included 203 teams sanctioned by FIFA

There will be included 7,469 players and 19 officially licensed managers in the game

Over 15 hours of added in-game commentary

There will be 21 new stadiums, including all 12 authentic stadiums in Brazil

EA Sports Talk Radio will be live – receive dynamic tournament updates from your choice of Andy Goldstein and Ian Darke, or Michael Davies and Roger Bennett (Men in Blazers) as you play through various offline modes. Over 50 hours of recorded audio keeps the narrative fresh and entertaining.

Play in authentic Brazilian stadiums, and recognise the support of newly rendered crowds and patriotic presentation to replicate the passion of the World Cup 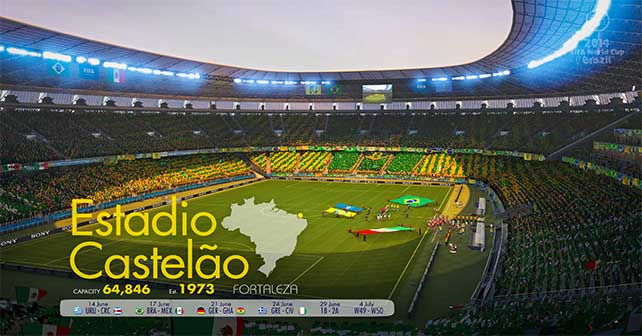 New control systems with more responsive dribbling, and pinpoint passing on the agenda. Change direction on and off the ball with purpose

Adidas ball Physics will be included – EA have partnered with adidas to deliver the most realistic ball physics system on Xbox 360 and PS3, taking data from the adidas Innovation Lab in Herzogenaurach, Germany, to implement it into the game to give the Brazuca and other adidas balls true-to-life flight and grass friction

New penalty kicks. With new save and animations and shot tuning that puts players in control of their nation’s fate. Goalkeeper antics to throw off your opposition including wobbly-knees, matador and shoot-it-there animations.

Added challenges based on play from each real-world match day.

Stay tuned with us to know more about 2014 FIFA World Cup Brazil.