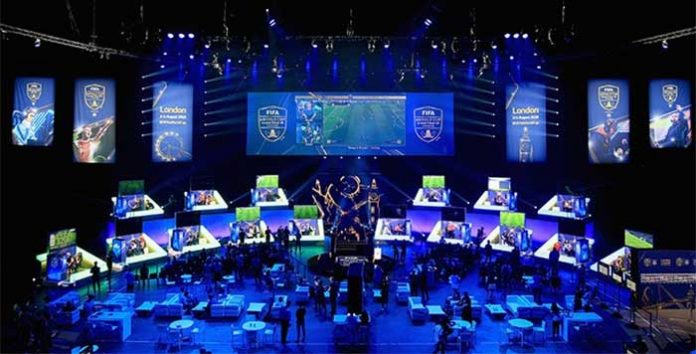 The gaming world has changed the idea of the word ‘FIFA’. As soon as the word reaches our ears, we think about a video game and a gaming console instead of the Football Federation. Well, people love sports. Most of the millennials like hitting the pitch to tranquillize their yearning for the game while some of them are lazy and fancy turning to the TV for that matter. But thanks to our friend technology, we can now play the virtual counterpart of the game at our homes. Not to mention, we can compete with players all across the globe and have millions of eyeballs glued to watch us — imagine people betting their money to see you play a video game — thanks to myriad options of online sports betting!

Well, that’s how eSports have shaped the industry of sports and games today. Sports are no longer constrained to running around on the grounds and breaking a sweat. The rhetoric argument of questioning people for watching teens play video games has become obsolete with time and for obvious reasons — think about the difference between watching people play football on TV and watching gamers controlling players in the EA’s FIFA series — aren’t both the same things — debatable though— since both of them involve real people employing their skills and competing with other humans.

Speaking about FIFA, the number of online players are mushrooming every year and the userbase has grown around 260 million players now. Although FIFA still has a long road to go in contrast to the giants of eSports — DOTA, League of Legends and CS: GO. Nevertheless, Todd Sitrin, senior VP and the general manager EA’ competitive gaming division looks pretty optimistic about the growth of the game in the eSports market. In an interview with Gamesindustry.biz, he said, “Last year we saw a tripling of our viewership numbers,”
“Everyone knows that there is the big three in esports – DOTA, League of Legends and Counter-Strike: GO. We are not quite at that level yet, but we are in the same region of viewership that the Overwatch League sees,” he added.

“I think that surprises a lot of people, because why would people want to watch people play this when they can just watch the live sport counterpart?” he said. “And the reason is really simple. FIFA esports is by far the most accessible esport that exists out there.” Sitrin continued: “Everybody knows the rules of the game. Billions of people around the world know the teams that are being played. Billions of people know the players and have an emotional attachment to them. All of that makes it easy to watch and understand. If you look at a lot of the other games that I just mentioned, those are very complicated, deep, inaccessible viewing experiences. So there’s a difference right off the bat in terms of the ease of use.“

If you’re a football, you must have noticed football clubs hiring Professional FIFA players to represent their clubs. Like in Premier League, Manchester City and West Ham have done that. In fact, AS Roma, Wolfsburg, Ajax, PSG and VF Bochum have also joined the party. They aren’t only hiring players’, they’ve created their eSports teams and are sending multiple players to represent their respective clubs in eSports tournament each year. This has resulted in clubs getting better traction of the eSports, and vice-versa.

eSports in the market of “Soccer lovers”

People of United States have a different sports universe in their own world. Football is Soccer there and over the past, it hasn’t been as renowned as it is in the rest of the world — ‘the’ most popular sport in the world. The market of sports lovers has always been dominated by the ‘big four’ over the past — NBA, NHL, MLB, NHL. Aforementioned games have been deeply entrenched in the hearts of people in the US and there’s fairly no surprise in that. NFL and NBA surfaced in the 1920s and 1940s respectively, while MLS has spent a paltry 15 years in the Sports market. Since its inception, MLS hasn’t been able to attract hot football talents across the globe. It is more of a home to veterans to end their career in a more respectful way — instead of warming bench of a major club. Coming to the point, there is a significant user base of FIFA in the US. Even studies suggest that the fans that watch MLS are twice two times more likely to be gamers as compared to average sports fans in North America. On top of that, more than 50% of people reckon that EA’s FIFA series has kindled their interest in soccer.

A crossover of old football fans and EA’s FIFA fans isn’t as likely as the new fans —mostly millennials. It’s a win-win situation for both the parties, MLS and EA’s FIFA, as they grow in cahoots.

But each industry has certain challenges and eSports is no different. It’s a new boy in the city of sports and it’s going to take some amount of time to settle. Albeit the wild popularity, there are things that have challenged the industry right from the beginning and even today.

Teenagers exposed to the dangers of fixing

To be honest, it’s great to see young kids making it to the centre stage and competing with some of the best gamers in the world. eSports transcends age barriers which in a way is great, but… there’s a catch. Think about a 15-year-old being offered a great sum of money to lose a final of a major tournament. As sad as it sounds, some cases of fixing have emerged over the past years and have encouraged the industry to impart more strict regulations to avoid cases of match-fixing.

As funny as they seem, they somewhat always have been a major challenge for the gaming giant. Although they have moved a long way ahead yet every we find Instagram filled with funny video clips of players doing unreal business on the football field in the game, or maybe a Youtuber revealing you a secret glitch that helps you score a goal. In all fairness, it’s really tough to emulate the physics of the game to the fullest. EA yet has done a great job and the gameplay today has become more real than ever. But, if EA has moved this far, we can hope them to up their level in their impending versions.

Apart from these, the game is yet to be as popular as the likes of CS: GO and DOTA. Nevertheless, it has a highly passionate user base of the millennials and more than the majority of the players play the game for their love for the beautiful game. There’s a fair amount of bias that EA will obviously never mind and it always gives a great advantage to them. Fans watch the games as they’re watching a football game and we know how a football stadium can turn into a madhouse.

Like it or not, eSports are no different from other sports today. Like famous Sportsters, the world of eSports has its own heroes and legends. All in all, we can now finally settle the debate of ‘Who is the best FIFA player in the world?’.