EA has revealed who are the best goal scorers from Serie A in FIFA 14.

It doesn’t need to mean that they are the best ones. On Ultimate Team, for example, there are much more cards of Torres than Aguero. And more cards means having more chances to score. Let’s see who are the ten Serie A players with more goals scored.

Position: 1
Name: MARIO BALOTELLI
Position: ST
Nationality: Italy
Club: AC Milan
Summary: The highest scoring Serie A player in FIFA 14 is also one of the most popular players in the world. Fans are already well aware of Balotelli’s 95 Penalties but he can also score goals from everywhere else on the pitch thanks to his 89 Ball Control, 86 Shot Power, 85s Dribbling and Acceleration and 84s in Finishing, Strength and Positioning. When Mario is super, he is unstoppable.

Position: 2
Name: GONZALO HIGUAIN
Position: ST
Nationality: Argentina
Club: Napoli
Summary: If Higuaín is unmarked and close to the goal, you can almost be certain he’s putting it in the back of the net. He’s one of the best goal-scorers on this list even though his other stats don’t quite match up to his 90 Finishing and 88 Positioning. He is certainly someone you don’t want to give too many opportunities to.

Position: 3
Name: MARIO GOMEZ
Position: ST
Nationality: Germany
Club: Fiorentina
Summary: In the real world, Mario Gómez’s first season with Fiorentina in Serie A has been plagued with a knee injury. But in FIFA 14, he is racking up the goals. Gómez is one of the best players in the world thanks to his 90 Positioning, 88 Strength and 87s in Finishing, Heading Accuracy and Volleys. His knack for being in the right spot and overpowering defenders enables him to unleash accurate headers or dangerous volleys.

Position: 4
Name: CARLOS TÉVEZ
Position: ST
Nationality: Argentina
Club: Juventus
Summary: Tévez joined Juventus in Serie A over the summer and is already one of the league’s highest-scoring players, due to the 86-Rated player possessing 89s in Stamina, Aggression and Positioning, 87s in Ball Control, Finishing, Volleys and Reactions, 86s in Shot Power and Balance and 84s in Long Shots, Penalties, Short Passing and Acceleration. Offensively, Tévez is the complete package and a player most defenders hope they don’t have to mark.

Position: 5
Name: STEPHAN EL SHAARAWY
Position: LW
Nationality: Italy
Club: AC Milan
Summary: Although he was featured on the Italian cover of FIFA 14, the football world has still not yet truly grasped the potential of Milan’s El Shaarawy. FIFA players already know what he can do on the pitch. The Left Winger possesses 88s in Acceleration and Agility, 87 Ball Control, 86s in Curve and Sprint Speed, and 84 Stamina. If you like to play the width of the pitch and need someone on the left side, El Shaarawy should be one of the first players you consider.

Position: 6
Name: VICTOR IBARBO
Position: ST
Nationality: Colombia
Club: Cagliari
Summary: Another young Colombian makes the list, and he also doesn’t necessarily stand out with his shooting abilities, but does make his mark due to his speed. Only the strongest defenders in FIFA 14 can stop Ibarbo’s 95 Sprint Speed and 89 Acceleration along with his 87 Dribbling and 85 Ball Control. While Cagliari supporters must be happy with Ibarbo, the Colombian National team must be even more thrilled with what he might be able to do for them this summer in Brazil.

Position: 7
Name: LUIS MURIEL
Position: ST
Nationality: Colombia
Club: Udinese
Summary: At only 22 years of age, Udinese’s Luis Muriel has the potential to grow into an elite footballer. Even at this early stage in his career, he is a speed demon with 90 Sprint Speed and 88 Acceleration. Although his shooting stats aren’t as impressive, Muriel can still be incredibly helpful thanks to his 87 Dribbling, 86 Agility and 85 Ball Control.

Position: 8
Name: LLORENTE
Position: ST
Nationality: Spain
Club: Juventus
Summary: After spending his entire career in Spain, Llorente has moved for Serie A and joined Juventus last summer and he has already made an impact with the Turin side. His stats stand out: Llorente’s 93 Heading Accuracy, 92 Strength and 88 Positioning make him dangerous on headers. It’s difficult to take him down, and he seems to always in the right spot, something many managers value in a player. When facing Juventus or Llorente on the pitch, you will want to limit the possibilities of corners.

Position: 9
Name: MIRKO VUCINIC
Position: ST
Nationality: Montenegro
Club: Juventus
Summary: Vučinić has been playing in Italy for over a decade and with his familiarity in the league, he often has fairly consistent seasons. Although he doesn’t have skills that would initially make him noticeable to the casual fan, his wide range makes him a threat everywhere on the pitch. His 89 Ball Control is his strongest attribute, followed by 86s in Short Passing and Curve, 85s in Dribbling, Reactions and Vision, 83 Shot Power and 81s in Volley and Sprint Speed.

Position: 10
Name: RODRIGO PALACIO
Position: ST
Nationality: Argentina
Club: Inter
Summary: The 31 year-old Argentinean striker fills his role quite well thanks to his 87 Penalties and 86s in Ball Control, Finishing, Acceleration and Positioning. His speed and goal-scoring ability is vital for his position and reason enough as to why he’s one of the best. 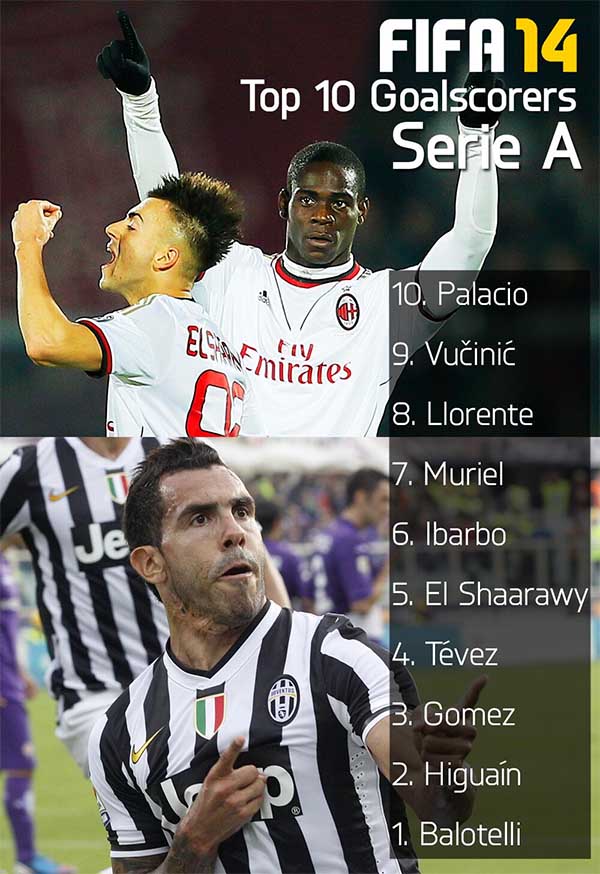