Good news: it will be possible to transfer FUT 14 progress to Next-Gen consoles !

One month later of the date that we published this article, EA Sports has update the FIFA Points carryover rules. You will be able to transfer your FIFA Points between current and next-gen console whenever you want and to make a one time transfer between FUT 13 and FUT 14. If you want to know more about it, click HERE

Within each of the respective platforms (Xbox and PlayStation), FIFA 14 Ultimate Team will share a common auction market so that fans can enjoy a richer and deeper experience with the millions of other players in the Ultimate Team world from the moment the new consoles launch.

Gamers will also have a one-time choice to transfer their FIFA Points between Xbox 360 and Xbox One, and between PlayStation 3 and PlayStation 4. 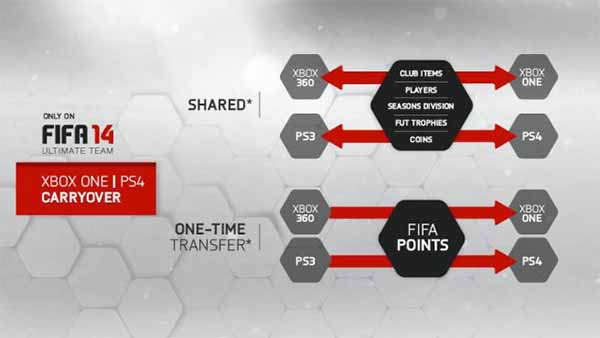 According to Matt Bilbey, Senior Vice-President and Group GM, EA SPORTS, “Our fans invest an enormous amount of time and energy into FIFA Ultimate Team as they craft their own unique squads, and recognizing that investment is absolutely essential“. He also said that “We will ensure that no time will be wasted and fans will get full value for the investment they make from the start of the season on Xbox 360 and PlayStation 3 to their move to their new console“.

If you are planning to buy a Playstation 4 or XBox One these are great news for sure.