For the last few years, the loudest and most frequent fan requests has been to include the Turkish League in EA Sports FIFA. All 18 clubs that make up Turkey’s Süper Lig will be included in FIFA 15.

From defending champions Fenerbahçe and perennial contenders Galatasaray, Beşiktaş, and Trabzonspor to newly promoted Başakşehir Spor Kulübü, Balıkesirspor and Mersin İdman Yurdu’na you will be able to play as any of the 18 clubs that play in Turkey’s highest-tier league. All clubs will feature authentic logos, kits, and rosters.

In addition to that, players such as last season’s leading scorer Aatif Chahechouhe of Sivasspor, Fenerbahçe’s Moussa Sow, and Beşiktaş goalkeeper Tolga Zengin will be included in FIFA 15 Ultimate Team this September. 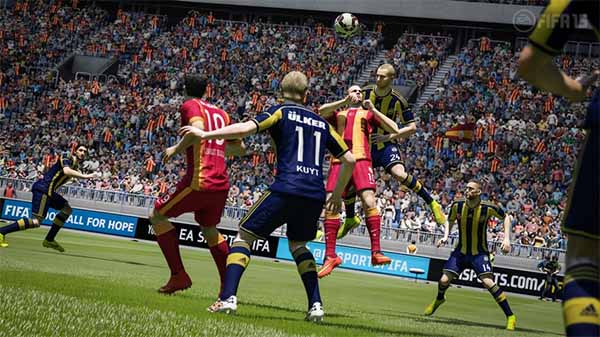 The Turkish League was to be included in FIFA 14 but it hasn’t happened. First it was a Fenerbahce agent who has revealed negotiations with EA to have the semi-finalist of Europa League 1013 in the new game. Everybody thought that it means that two Turkish teams will be in FIFA 14 “Rest of World” section (Galatasaray was the other one). Then, it was the Turkish Union of Clubs marketing department that answered a fan about if it is possible to have the Turkish League in FIFA 14:
“We are at the contract signing stage with EA Games. Deal will be done in few days. Our league will definitely be included in the game.”

Now, the wait is over. No more rumours. These are the 18 fully licensed Turkish League teams that are included in FIFA 15:

2 thoughts on “Turkish League is Officially Included in FIFA 15”