The first edition of the Virtual LaLiga eSports Tournament is happening this year, with the best EA SPORTS ™ FIFA 18 players from around the country competing for bragging rights. Confused? Don’t worry, we’ve got you covered.

McDonald’s Virtual LaLiga eSports touches down in Spain as the first major project from LaLiga eSports. In association with the Professional Videogame League (Liga de Videojuegos Profesional; LVP), Mediapro’s strategic partner in the field of electronic sports, and officially part of the EA SPORTS FIFA 18 Global Series on the Road to the FIFA eWorld Cup 2018, the goal is to transform this ambitious tournament into the hallmark competition in Spain.

The competition will consist of an online qualification stage and an in-person final stage and will include Xbox and PlayStation categories. The first stage, which kicks off on 19 March, will be open to all gamers over the age of 16 and will be played entirely online on ArenaGG, the LVP gaming platform. Thirty-two places at the in-person stage – 16 per Xbox and 15 per PlayStation – will be up for grabs.

The second part of the tournament, which is scheduled to begin on 16 April, will be played in person at the LVP venue in Barcelona. Sixteen players per platform will compete each week in straight knockout rounds to attain national glory. The winner of each event will claim a sport in the EA SPORTS FIFA 18 Global Series Playoffs.

Furthermore, McDonald’s will organise an exclusive tournament in which the highest-placed participant will obtain one of the 16 places at the McDonald’s Virtual LaLiga eSports final stage. This competition will feature McDonald’s as LaLiga’s main partner in the eSports universe. Additionally, El Corte Ingles, Allianz Hyunday and Orange will also be involved in LaLiga’s first foray in the world of eSports.

Mediapro and the Professional Videogame League (LVP) joined forces in 2016 to professionalise, expand and promote eSports, making the LVP the leading eSports competition in Spain, and raising its international profile with competitions in Argentina, Chile, Mexico, Colombia, Peru and Portugal. 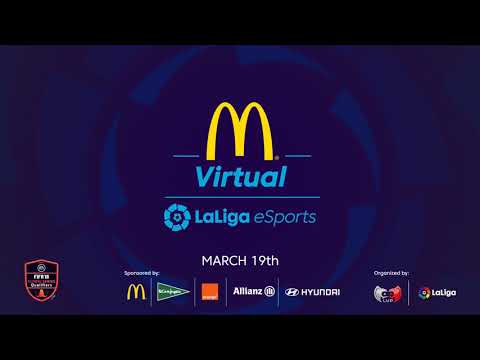