The FIFA Interactive World Cup 2013 is over. Find out who won the title.

In the start of the month we brought you everything about the FIWC.

To who don’t knows, FIFA Interactive World Cup is an official FIFA tournament that recognizes, every year, the virtual football talents of gamers playing the EA SPORTS™ FIFA series on the PlayStation®3. A staggering 2.5 million players signed-up for the FIFA Interactive World Cup 2013, making this year’s tournament the most contested in the FIWC’s ten year history. The world’s top 21 virtual footballers who emerged victorious during one of the six seasons will meet in Madrid between 6 and 8 May to go head to head at the Grand Final to determine the FIWC 2013 champion.

The world’s top 21 virtual footballers who emerged victorious during one of the six seasons met in Madrid between 6 and 8 May to the Grand Final. Let’s see who won… 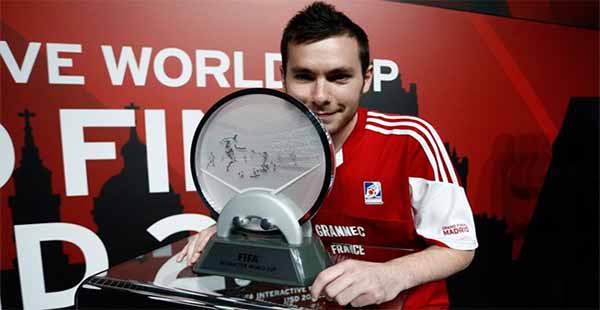 The FIFA Interactive World Cup 2013 has wrapped up in dramatic fashion with Bruce Grannec of France claiming a second world title after beating Mexico’s Andrei Torres Vivero 1-0 in a tense finale in Madrid on Wednesday 8 May. Grannec, who adds to his 2009 crown, took home a cool 20,000 USD in prize money and a trip for two to the FIFA Ballon d’Or 2013, where he will rub shoulders with the biggest stars in world football.

The Final match for the ninth edition of the tournament was a repeat of the Grannec-Vivero group game that kicked off Day 2. Grannec won that match 5-0 and the game proved to be a turning point in the tournament for the French champion. “It was a little bit of a miracle to come back and win it,” said Bruce after defeating Vivero 1-0 in the final thanks to a right-footed Cristiano Ronaldo drive.

The FIFA Interactive World Cup 2013 Champion also said that “the important thing is this new title, the world championship, which is all down to hard work”. He also express that he was “very happy, even if it might not look that way”.

In his four Grand Final appearances (2009, 2010, 2012, 2013) Bruce Grannec has reached an FIWC gold medal match a staggering three times and the semi-finals on all four occasions. While lethal on the attack The Machine‘s defensive prowess is an integral part of his game; Bruce conceded only 5 goals in the entire tournament. Maybe the secret to win on FIFA 14 is to defend well…

FGN watched the semi-finals and final matches and can ensure that he deserved the title. Congratulations.

Check out all the FIFA Interactive World Cup 2013 Results: