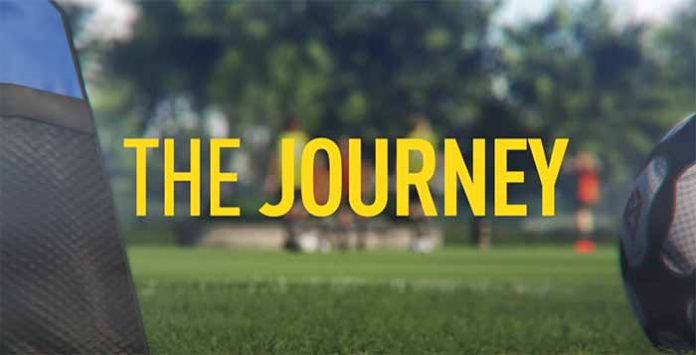 The Journey, a career mode introduced in FIFA 17 which allowed players to take control of fledgling star Alex Hunter, received excellent reviews and feedback from players. The Guardian claimed that it was this feature which allowed EA’s offering to outshine its long-term rival Pro Evolution Soccer 2017, and give fans just enough to improve on FIFA 16 from the previous year. With many players left wanting more after only being able to star in one season as the breakout star, it should come as good news that Hunter and co. will be returning in FIFA 18 in The Journey 2.

EA recently confirmed that the one-player, decision-based story mode would be back on the next edition of the game which is set to be released on September 29, 2017. Players who enjoyed the mode in FIFA 17 will continue at the club that they had chosen last time out, and new players would be able to select an initial starting club. Players had just left Hunter’s story as the young star completed his debut season with an FA cup win.

Now, the stage is only going to get bigger for the player who is inspired by real-life young stars like Marcus Rashford at Manchester United and Reece Oxford who is currently on loan from West Ham United at Borussia Monchengladbach in the Bundesliga. Oxford shot to stardom after starting for Slaven Bilic’s side when he was just 16 years and 168 days old, making him the youngest ever player for the Irons. Other young up-and-coming stars such as Harry Kane featured in The Journey, and it served to point out just how quickly footballers can rise to fame. The Spurs striker has now won the Golden Boot in consecutive seasons, and it wouldn’t be a bad idea staking a free bet on him doing it again this time out at odds of around 3/1.

The Journey, which featured in FIFA 2017, tracked Hunter from an unspecified academy to his first signing at a Premier League club of the player’s choice. In terms of gameplay, players could select whether to solely play as Hunter or control the whole team, but playing as the young star provided a more immersive experience. Hunter is a 17-year-old attacker with his specialist position being up to the player. To get the most out of the game, it was recommended that you play as a striker or a number ten, thus giving you more opportunities in front of goal and a better chance of scoring. During the games, Hunter would get a manager rating based on his performances, and players would also have to complete a series of tasks such as scoring and assisting goals. There was also the choice of playing as a winger, but from the wide positions, players wouldn’t get as many opportunities to score.

Another key feature of The Journey was the off-pitch storyline tracking how Hunter’s rise to fame affected his life and others around him. Players would watch the video clips and often be asked to make decisions on how to respond. The choice was to be arrogant, chilled out, or somewhere in the middle. Arrogance would appease the fans and gain a larger following on Twitter, but there was a risk of angering the manager and causing him to reduce your minutes on the pitch.

The Journey 2 will continue to track the rise of Hunter, and the gameplay elements with the checklists to complete within the match are set to continue. After watching the young player start out and building up his stats in the first season last year, players are excited about watching the next chapter of the young star’s story unfold. Some details for the new game have been released, along with a teaser trailer.

To get players instantly involved and immersed in Hunter’s story again, they will be faced with a completely new challenge which opens up a number of different possible storyline outcomes. This probably means that Hunter will be on the move from the club that players chose at the start of FIFA 17, and could make the switch to one of the other major leagues in Europe or America. There is also the possibility that the player may receive his first England call-up in the same way Kane and Rashford did after their breakout Premier League seasons. One criticism that players had of the first Hunter adventure was that the choices that players had to make didn’t have too much of an impact on the general storyline. This time, however, there will be huge branching storylines in which two different players could take massively different paths. In addition to more advanced storylines and choices available, players will be able to customise Hunter with tattoos and haircuts, something which wasn’t an option in FIFA 17. Instead of it being solely a one-player game, there is also now the chance to invite friends round and play together in a cooperative setting.

Although the continued story mode is an exciting addition and fans are looking forward to seeing what happens in the next chapter, it is just a minor element of what’s to come in FIFA 18. EA representatives have confirmed that there have been some upgrades to the general gameplay, making players more responsive and capable of pulling off outstanding tricks and sensational goals. Certain players have unique abilities, such as Cristiano Ronaldo’s blistering turn of pace or Arjen Robben’s famous wide arm movements while sprinting. There has also been a lot of work done on the crowds and stadiums, with each location getting its own specific atmosphere based on what it’s like in the real world. For instance, there will be a totally different feel playing in the Premier League at Anfield as there would in the Bundesliga at the Allianz Arena. One of the most exciting new features is the varied playing styles. Players will now have the option to take on a tiki-taka or a high press approach, along with other styles which are prevalent in the modern game. Being able to have more control over the tactics will be a major improvement on FIFA 17 which was criticised in this regard.

There’s not long left to wait until the greatest football game ever made returns to our consoles. Eager players can pre-order now, and if you opt for the Icon Edition or the Ronaldo Edition you can start playing the game three days before the scheduled release date.