Do you have a question about the FIFA 14 Demo ? Check here the most frequently asked questions.

Introduction to the FIFA 14 Demo

Fans will now get to experience the innovation that earned FIFA 14 the “Best Sports Game” award at the 2013 Gamescom. Play a match in the Camp Nou as FC Barcelona, AC Milan, Manchester City, Tottenham, Paris Saint-Germain, Borussia Dortmund, Boca Juniors, NY Red Bulls or as one of the unique demo FIFA Ultimate Teams.

FIFA 14 is the pinnacle of innovation on this current generation of consoles, which gives fans the experience and emotion of scoring great goals. Innovations to the award-winning gameplay make the game more authentic and fun. Dictate the tempo of a match, create chances through midfield, and then unleash the perfect strike. A new feature called Pure Shot and a brand-new ball physics system will transform shooting. Every shot attempt will feel real and when players connect with the perfect strike it will feel exhilarating. 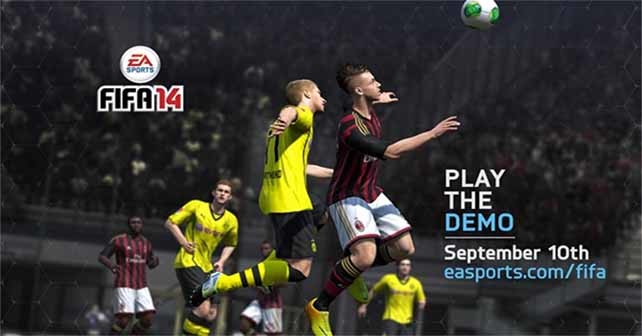 Q: When does FIFA 14 hit stores and are there purchase bonuses?
A: September 24th in North America and by September 26 worldwide.

Q: What features will be available?
A: Real Ball Physics & Pure Shot- Pure Shot will let FIFA fans feel what it is like to connect with the perfect strike while a brand new ball physics system called Real Ball Physics will ensure the trajectory of the ball behaves as it would in real life. The combination of Pure Shot and Real Ball Physics will open the door for the most rewarding and varied shot selection in the FIFA franchise to date.
Precision Movement – New to FIFA 14, this feature recreates the dynamic movement of real-world players. Precision Movement was created from new locomotion technology developed by the FIFA team. Locomotion is fundamental to all areas of gameplay, determining the way players move on the pitch.
Teammate Intelligence – players will have better decision-making and teams will play smarter on both the attack and defense to bring the beauty of the game to life. When combined with Protect the Ball, Teammate Intelligence opens up the entire field. Plays will form organically as smarter decisions are made, meaning a more realistic football experience.

Q: What FUT features are in the demo?
A: The demo version of FIFA 14 Ultimate Team introduces the basics of FUT and how to compete, acquire players, and manage squads.

Q: Why is Bale still on Spurs and is Kaka not on AC Milan ?
Club rosters for the demo were final before the transfer window closed. A few late transfers will not appear at their new club in the demo.