EA Sports published a FAQ about FIFA 15 Ultimate Team Price Ranges, answering the most common questions made by the fans.

Where are the benefits of Price Ranges?
Price Ranges prevent player prices from artificially inflating in price due to illegitimate activity, which limits your ability to build your Ultimate Team. In addition, as Price Ranges are balanced, they will give FUT fans a better understanding of the approximate value of their items. Over time, this will help return the Transfer Market to a level that’s fairer for everyone and eliminate excessively high player prices due to fraudulent coins in the market.

Why did you decide to implement Price Ranges in the middle of FUT 15?
The inflation of player prices (due to increased levels of fraudulent coins in the market) had to be addressed as soon as possible. The benefits, including a balanced market and attainable player prices, are the positives of making this change for FUT 15.

Why do you need to have a minimum on price range?
Removing the minimum range would open Price Ranges to the movement of fraudulent coin selling transfers. Coin sellers are looking to use certain players with market values much lower than their maximum range in order to transfer set amounts of coins. We understand that the minimum price range has been a frustration for many of you, but it’s a necessary part of eliminating coin selling in FUT. We’ll continue to adjust Price Ranges for players in order to find the right balance for the Transfer Market.

Why can’t I find players on the Transfer Market?
At first, all Price Ranges were identical across all platforms for most players. This caused the upper range to be lower than the perceived market value for certain players on some platforms. You couldn’t find certain players because other FUT fans didn’t think the Price Range matched that player’s value on that console platform – and so did not choose to sell. Now we are setting different price ranges per platform starting with a selection of high-rated players – this will address your concerns on value.

Why is it so hard to sell players on the Transfer Market?
Since Price Ranges were initially the same across all platforms, they didn’t always match the perceived value on that particular platform. The lower end of the player price range was higher than the perceived market value for certain players on some platforms, so FUT fans thought that player was only worth the value of the minimum range, causing fans to hesitate when deciding to bid. However, we’ve now started to set different ranges per platform for certain high value players. One thing to remember is that these players are still selling and the market is active, but there is less demand at some of the prices set. As we watch how things unfold on the Transfer Market and we see a player is consistently selling at its lower range, we will move the range down so more FUT fans are able to sell their players.

How am I going to make coins through trading now?
We will always keep Price Ranges wide enough to allow all fans to gain more coins by trading on the Transfer Market.

Why don’t you lower the price ranges on players? A lot of players aren’t selling at the moment.
We’ve already adjusted Price Ranges for certain players, and also set different ranges per platform. We’ll continue adjust these ranges based on the market and on your feedback throughout the year. You can check out all our Price Ranges adjustments here.

What about events like St. Patrick’s Day that we just had? Will you raise player ranges for specific players around those types of events?
Price Ranges reflect real market data. We don’t plan on changing Price Ranges in anticipation of events, such as changing ranges for Irish players in anticipation of the St. Patrick’s Day tournament, but will continue to adjust ranges based on general market activity.

Why don’t you just sell coins yourselves in place of FIFA Points?
Selling coins directly to fans contradicts the core principles of FIFA Ultimate Team. The game is designed to reward progress by playing the game the right way through matches, squad building, Transfer Market trading, and making decisions with pack items. FUT fans understand the enjoyment of making decisions on route to building their Ultimate Team. Fans that want to accelerate their progress, can do so by opening packs with FIFA Points or earned coins. The choice has always been up to you and that’s part of the fun.
As coin selling became more prevalent, it created an illegitimate shortcut, and people may have forgotten that the game isn’t meant to instantly give you the best items or players. It’s about progression. It’s about chasing the win. It’s about managing your squads and making decisions.

Did you introduce Price Ranges just to ensure EA makes money?
Price Ranges were implemented to benefit of the entire community. EA has no plans to sell coins directly to players, and we believe the game benefits when the playing field is level for all and progress is achieved through playing matches, squad building, Transfer Market trading and making decisions with pack items.

What have you done to stop exploiters from farming coins?
Many of the tactics we implement against coin farming happen in the background and aren’t always clearly visible to the FUT community. Throughout the year, we’ve implemented many new security changes to battle coin farming and selling. The latest example is the daily match limit we implemented that prevents one of the major methods of coin farming. We also ban thousands of coin selling and farming accounts on a weekly basis. You may have also noticed a significant decrease in fake accounts that impersonate our EA SPORTS FIFA Twitter. We’ve recently implemented a new process to delete thousands of these malicious accounts that impersonate EA and attempt to phish for account info.

Why don’t you increase the amount of coin rewards per game?
Our focus is on balancing and stabilizing the economy so that current coin rewards maintain their intended value. Increasing coin rewards for matches would only continue the imbalance and instability of the FUT economy. However, we’re currently exploring new FUT promotions and content ideas while keeping the game balanced. We will also offer featured in-game tournaments with bigger rewards.

How do you determine price ranges per player?
We’re reviewing data such as average sale price and the percentage of items sold (out of all such items listed) to assist us in deciding whether or not to increase or decrease price ranges. New player releases such as TOTW are based on historical data, the player’s desirability, and similar players. The ranges for new player releases are left a bit wider for prices to settle, and will continue to be adjusted as the average sale price of an item changes. 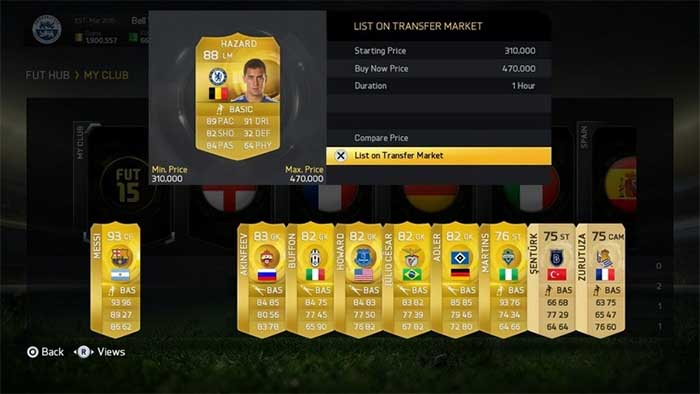